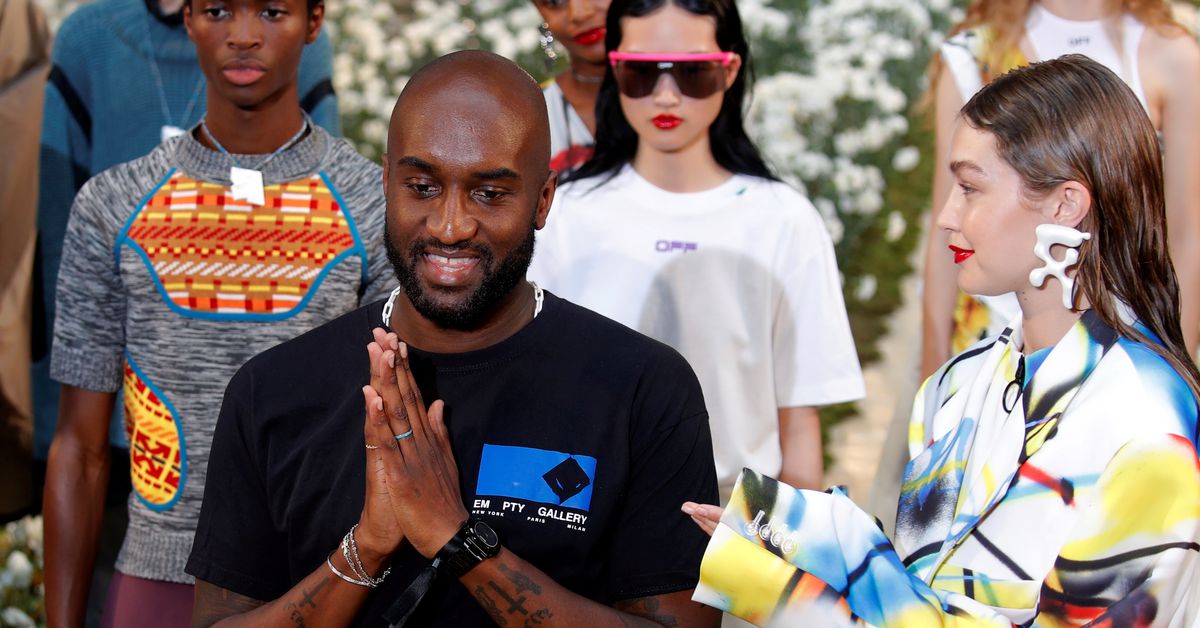 Designer Virgil Abloh appears with model Gigi Hadid at the end of his Spring/Summer 2020 collection show for his label Off-White during Men’s Fashion Week in Paris, France, June 19, 2019. REUTERS/Charles Platiau

PARIS, Dec 3 (Reuters) – It was a “kid in a candy store” moment for Billie Essco when he found himself in a cavernous space beneath the Louvre Museum in January last year, backstage before a show for fashion designer Virgil Abloh’s luxury streetwear label Off-White.

Essco, a 31-year-old Black American artist, musician and clothing designer from Buffalo, New York had made a last minute decision to join his friend, rapper Westside Gunn, on a trip to Paris with hopes of sneaking into a show during Fashion Week.

He never would have dreamt of hanging out with Abloh, who besides being the founder of Off-White, was the menswear designer for Louis Vuitton – the world’s biggest luxury brand owned by French giant LVMH (LVMH.PA).

“I’ve been channelling this man, his energy and his designs for the last five years and now I’m here seeing things that the world hasn’t seen yet,” said Essco, also known as Uptown Chase.

“Fashion was such a closed-knit, niche thing, it was a kind of insider, ‘if you know, you know’ — I believe that Virgil opened it up for people like me to come in, into this community.”

Abloh, fashion’s highest profile Black designer, died on Sunday at just 41 after a private battle with a rare form of cancer. As recently as July he had been promoted to work across LVMH’s 75 brands.

But for people like Essco, skateboarding teenagers in his home city of Chicago and orphaned West African refugees in Paris playing for a French amateur football team in Abloh-designed T-shirts, his name and influence resonated well beyond the traditional, rarefied world of luxury.

A first generation Ghanaian American, Abloh – who also worked as a DJ and visual artist – was not a classically trained designer. He often said he drew inspiration from what he saw in the street.

Essco, who studied fashion design at Buffalo State College, had followed Abloh’s rise over the years and appreciated how he brought together hip-hop culture and fashion, breaking boundaries at a time when styles were mostly clean-cut and traditional, and lacking “sparks and flair”.

Abloh’s early work applying large print logos to Ralph Lauren flannel shirts echoed with Essco, who was at the time experimenting with screen printing on garments sourced from local second hand shops. Later, after founding Off-White, the designer reposted an image of a model in a hoodie that Essco had styled on Instagram.

“I realized myself through following him as a person, and as a man, it just taught me that I wasn’t crazy, and I could be exactly who I wanted to be – I could be from the hood, but college educated,” said Essco.

He described Abloh’s approach as “creating a space where you can all be in the room instead of having to pick a side – because we come from a place where you choose to do one thing and that’s it, you’ve got to stick with it”.

During his January 2020 trip to Paris, Abloh offered Gunn and Essco invitations to his label’s catwalk show, after parties and the highly coveted Louis Vuitton show.

“To see not only how human he was but how similar he was to my friends, and to myself, I was like, ah, we could do this – not only could we do this, but finally, it’s being done,” he said.

Orlando: Beyond The Parks

Things I Learned When Trying on Wedding Dresses, Not Getting Married

Memphis Depay ‘Returning To Man United Has Always Been Of Interest’